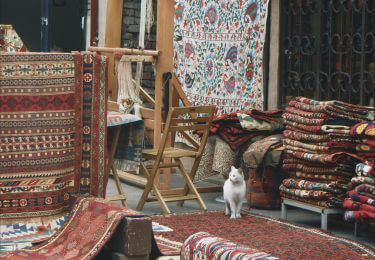 Authentic Persian rugs have been a sign of wealth and status for close to 2500 years. Initially used and created by Persians to keep themselves off the damp, cold floors of their living structures, they started seeing them as pieces of art as opposed to just a functional piece of their homes. As the Persian people learned what materials to use and expanded styles, these rugs made their way to the ancient trade route, Silk Road. From there, those of Royalty and Wealth began acquiring them as additions to their palaces, showcasing the reach of their wealth. We wanted to highlight some Persian rugs that have stood the test of time and are world renowned artifacts. These pieces of art have been exchanged between those with extravagant wealth and are now in museums. Check out some of the priceless rugs that are being displayed around the world.

The Ardabil Carpets are a pair of two famous ancient carpets. The pair was thought to be created in the 16th century, they were both housed in a Mosque in the area. After years of heavy use, a British carpet dealer restored them and put them on the market. Some notable people that obtained these rugs over the years are the founder of Getty Oil and King Farouk of Egypt who gifted the rug to his sister as a wedding gift. Considered classics due to their design, they now are being displayed at the Victoria and Albert Museum in London and the Los Angeles County Museum of Art. Duplicates and similar carpets have been replicated due to its beautiful design.

The rugs described in this blog are priceless, historical artifacts that deservingly are where they belong, in museums. Persian Oriental Rugs has a selection of rugs dating back over 100 years. With the practices used before modern rug-making were put into effect, rugs this old are sought after by those who appreciate antique rugs. Give us a call to learn more about the antique rugs we have in stock and we can explain the history behind each piece of art!